Some days you just know it’s going to be a really good day:  The Sunday Times on the table.   Espresso frothing in the kitchen.  Sourdough pancakes on the griddle.   And Newt Gingrich winning in South Carolina…

Could things get any better?  Sure:  He could win the Republican nomination and choose Christine O’Donnell as his running mate.  One can dream.

And yet the dream must stop:  Gloating is unseemly and Schadenfreude vulgar.

What will undo the mad professor from West Georgia College?  His serial philandering?  The ethics investigation?  His flip-flopping? His less than stellar campaign organization?  The financial intervention of the Republican establishment to prevent an electoral debacle?

I’ll go with the characterological difficulties.  This, of course, brings us to phrenology.

On first impression (my sources are here and here) things look promising for Gingrich:  He scores very high (with his large forehead) on the faculties of causality and comparison.  The faculty of comparison, of course, is key to analogical reasoning and to the critical mind.   Causality is the faculty for abstract thinking (also evidenced by the high forehead.)

But not all things are propitious.  And indeed, they quickly go from bad to worse.   Particularly worrisome for Gingrich supporters is the obviously high development of the destructiveness faculty—evidenced by a clear prominence of the outer regions of the cranium immediately above the ear: 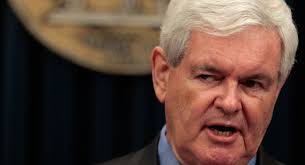 As has been known, at least since the publication of Fowler’s treatise, destructiveness when not restrained by the moral faculties can lead to cruelty, anger, and even violence.  Particularly worrisome here is that high destructiveness combined with high self-esteem (grandiosity qualifies and self-congratulatory grandiosity is off the charts) can translate into a brutal tyrannical character.   The concerns mount when high development of these faculties are combined with  marked deficits in the area of benevolence and amativeness.  And clearly here (the lower back of the cranium) Gingrich is seriously lacking.  Indeed, the under-development is striking: