Wild-ish: Self and Community on the Trail

A lot of wilderness narratives go like this.  A man walks alone into the woods/desert/mountains.  He confronts nature in all its glory and terror.  He barely escapes grave danger and returns to tell the tale or/He does not escape grave danger, but nonetheless overcomes blood loss and near starvation and returns to tell the tale or/He disappears without a trace and someone else tells his tale. See, e.g., Into the Wild; Everett Ruess: A Vagabond for Beauty; 127 Hours: Between a Rock and Hard Place; and untold numbers of mountaineering and climbing memoirs and biographies.

Cheryl Strayed’s wilderness narrative, Wild: From Lost to Found on the Pacific Crest Trail, has some of the classic elements of the genre. Strayed (a name the author adopted after her mother died and her life fell to pieces) sets off alone to have close encounters with nature.  She barely escapes being impaled by a free range bull, almost steps on several rattle snakes, and faces extremes of temperature and terrain.  Also, consistent with a sub-category of the wilderness narrative, many of Strayed’s hardships are caused by her own lack of experience and preparation.  She sets out in new boots that are a size too small.  Her pack weighs twenty pounds more than it should because she has included an amusing array of extras, ranging from a folding saw to a large pack of condoms.  Finally, Strayed’s memoir resonates with aspects of the literature that have a self-discovery/self-help thread.  She hit bottom (profligate drugs, serial infidelity to her husband, and other self-destructive behavior in the wake of her mother’s death and the disintegration of her family), and got lost in the woods to find herself.

Yet unlike the classic versions described above, Strayed’s account is filled with social encounters. Interspersed with stretches of hiking alone, Strayed meets and camps with others on the trail, and takes several detours to avoid heavy snow pack and collect food and supplies. Sometimes she ditches the trek just to give her mangled feet a break.  Because her descriptions of the off-trail food are so vivid, at times it seemed like Strayed was eating fries and drinking Snapple lemonade as often as she was choking down trail mix.  Also, while Strayed wrote the requisite paens to the starry night sky, the jagged and snow-capped peaks, the riot of wild flowers, etc., etc., a great deal of her prose is devoted to feelings about other people.  She is trying to figure out how to live in society, not how to escape from it.

Another striking divergence from the classic wilderness narrative is Strayed’s inclusion of the desecrated parts of her journey. 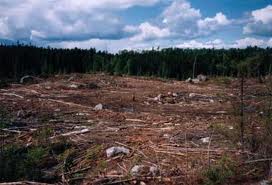 She hikes through clear-cuts as well as mossy old growth.  This is our world, after all, even the one we escape to.  It bears our marks, our uses, our legacies, including those of our own emotional lives.  Finally, Strayed’s most chilling encounter is not with falling rocks, hungry grizzlies, or cascades of ice and snow, but with a creepy guy. Strayed’s biggest triumphs are those of reckoning with human loss, and the most significant threat to her security comes in human form as well.

One form of wilderness memoir isn’t more important or better than another.  The myth of utter solitude and self-reliance is compelling.  We like to read about it and even live it, from time to time.  But as our country, and its natures, seem to be flying apart under hyper-individualism’s irresistible force, a wilderness narrative that brings our human connections and impacts to the fore is a timely addition to the literature.

(For anyone interested in a more academic discussion of these ideas, see Mountains Without Handrails, Wilderness Without Cellphones, an earlier and much longer riff on the same themes.)